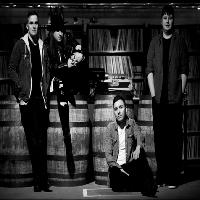 This event will have to be postponed to Sat 28 November due to the ongoing Pandemic. All tickets will be valid for the new date.

Black Dog Days are a four peice rock outfit from Broxburn West Lothian. Started in 2013 the band has been through a few line-up changes over the years as they have worked to develop their sound. The band consists today of founding members James Wilson (Lead vocals and guitar) and Jamie Lando (Guitar and backing vocals) along with Scott Lackie (Bass) and Jack Wilson (Drums).

In December of 2016 the band released their brand new single 'AMY' and hoping to finish their debut album by the winter of 2017. The guys from Black Dog Days are in the studio throughout the year working on new material. With headline shows under their belt across Scotland the band played their first sold out headline show at King Tuts Glasgow late June 2017.

Along with recording their first album they have been performing at some small festivals like Gig in the Goil and the Pumpherston music festival to name a few and hope to progress to larger festivals over the years as well as previously packed nights at Dreadnoughtrock.

This lively act are full of rock riffs and catchy sing along choruses . '4 Guys with 4 instruments, simple.'