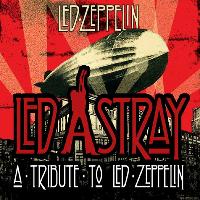 UPDATE 30/7/20 This event is POSTPONED. A new date is being worked out for 2021. All tickets will still remain valid for new date to be set.

Led Astray are a Scottish based tribute to the music of Led Zeppelin and great ambassadors for the club and live music in West Lothian.

A typical Led Astray performance contains the music of Led Zeppelin delivered with the skill, intensity and passion that made Led Zeppelin the greatest band EVER!
Formed in 2006 with the goal of bringing audiences the spirit and Presence of a live Led Zeppelin experience. Inspired by the live recordings of 'How The West Was Won', 'The Song Remains The Same' and the 'BBC Sessions' the band play Zeppelin's material with the bombast and improvisational flair of a typical 1970's Led Zeppelin performance.
Although the band are too young to have been able to see Zep live Ian and Fraser were lucky enough to attend Zeppelin's reunion concert at the O2 in 2007.
Ian Burns - Vocals

Available INSTANTLY ONLINE via Skiddle then in due course and run up to the event at DREADNOUGHTROCK PAYBOOTH, THE KILT STUDIO, and MID STREET BARBERS.

Rock Club follows Live session thro till 3am - Your Ticket also INCLUDES your entry if you wish to stay on a wee bit longer and rock out some more.