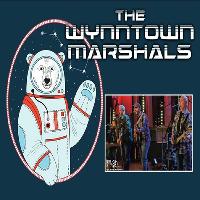 This Event sadly will have to be Postponed to 9 October due to the ongoing Covid-19 Pandemic. All tickets will be valid for the new date.

Anyone who wishes a refund at this time can do so via the link emailed from Skiddle for the Face Value of the Ticket but would would ask you to attend the new date.

As the Lockdown restrictions will be in place in Scotland until 28 May it does not leave enough time for the bands to be gig ready, sell sufficient tickets to make the event viable but as there is slim to no chance of live venues being able to open in June now anyway we have no option to postpone this event to the new date now listed.

The Wynntown Marshals are known as Britain's number one country-rock band and in the eyes of many top critics and reviewers have put it - Europe's top Americana band - a title that all who hear and know them will find difficult to argue with.

After decades of performing and recording it is our pleasure to welcome them to the home of Rock in West Lothian - Dreadnoughtrock.

'The Wynntown Marshals’ lyrics are never throwaway, the subject matter often obscure. World-weary yet uplifting melodies are channelled via strident guitars and gorgeous vocal harmonies, offset by beautiful keyboard parts, and driven by a rock-solid rhythm section. There’s something for everyone with the Marshals - nostalgic lyrics collide with jangly guitars and killer pop hooks, powerhouse guitars, plaintive pedal steel guitar, and washes of Hammond organ.'

For the uninitiated, they are a band who will have plenty of appeal for fans of artists such as The Jayhawks, Tom Petty, Richmond Fontaine, Ryan Adams, Neil Young and many more - perhaps even including Gram Parsons!

Suffused with many elements of Americana but the observant listener will also recognise a more than a passing likeness to the sound of fellow countrymen Del Amitri.

The Marshals invite you to pack your bags and get on the next bus to Wynntown - a small, homely place populated by down-to-earth, hard-working types, where a fist-fight is often followed by a bear-hug, and lost love and heartache might be only a drink away.

'One of my favourite bands – period!' - No Depression (US)

'The Wynntown Marshals continue to prove that you don't have to be American to make brilliant Americana.' David Stevenson (Americana UK)

SUPPORTING the lads is or should I say ARE :

Jason is as they say a well kent face at the club over the past decade performing and leading many bands and projects that all proved a hit. From the early days of Rock Gods, Schtick of Rock and laterly The King Lot it's been a superb musical journey.

The Journey continues with this new project featuring some top musicians around Scotland joining for the first time to play live - yeah FIRST TIME some amazing new songs being developed and evolved in the studio right now.

THIS IS A TICKET ONLY EVENT so please purchase in advance online or in printed form from our outlets in Bathgate or at the Club paybooth.

Rock Club action follows on after the live music wraps up and all ticket holders are welcome to stay on and chat to the bands or rock the ret of the night away til 3am upstairs in Scotland's Longest Running Rock club.