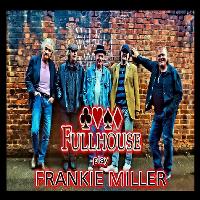 This Event sadly will have to be Postponed to a future date to be set due to the ongoing Covid-19 Pandemic. All tickets will be refunded at this time.

Any printed tickets purchased should be returned to the point of purchase for a full refund of the face value WHEN the outlets are back open. Online tickets will have their refund handled in the next 5-7 days via skiddle for the face value of the ticket.

As the Lockdown restrictions will be in place in Scotland until 28 May it does not leave enough time for the band to be gig ready, sell sufficient tickets to make the event viable but as there is slim to no chance of live venues being able to open we have no option to postpone this event until a new tour plan is put in place from the guys which will likely now to be 2021.

Frankie Miller was born on 2nd November 1949 in the East End of Glasgow. Growing up with a passion for the Bluesy, Soulful, Rock n' Roll music of Ray Charles and Little Richard, and for the way that their classic songs were crafted. If you are unfamiliar with Frankie Miller, simply check him out on YouTube. The first thing that will hit you like a hammer is his unbelievable voice, and his smouldering stage - presence. However, there’s more! Frankie Miller writes incredible songs. I suppose you'd have to ask Joe Walsh, Sir Elton John, Sir Rod Stewart, or Joe Cocker, Etta James, Cher, The - Travelling Wilburys, Willie Nelson, The Everly Brothers or Ray Charles about his writing prowess. These World Class Artists, incredible Musicians all, have each covered Frankie Miller songs.

Yet still Frankie remains largely an “Unsung Hero” in his own Country.

Now comes the exciting prospect of Frankie’s music being reinvigorated by some of the country’s finest musicians, Musicians totally dedicated to the works of their Friend, Frankie Miller.

The Band is made up of his own Old Bandmates, a reincarnation of ‘FULLHOUSE’, Frankie’s most successful Outfit from the mid/late 70’s.

Led by Guitarist Ray Minhinnett - a founding member of the original Fullhouse with Frankie himself - Ray Toured and recorded extensively with the great man, playing on Frankies’ classic tracks including: Be Good To Yourself, Fool In Love, Jealous Guy, Ain't Got No Money, Doodle Song and many more.

Ray is joined by Ed Deane on guitar. Formerly of The Frankie Miller Band Ed featured on the Falling In Love album, which boasted the single 'Darlin'.

Andy Golden: One of the two Newcomers to Miller’s music, he played drums on tracks on Frankie’s Double Take ‘Duets’ album. Prior to that he had served with The Pirates, and Original Thin Lizzy Guitarist - Eric Bell. Together with Tex Comer, contributes to a remarkable rhythm section of great Feel.

Should you now be thinking “What about the vocals?” Rest assured Gregor MacGregor - a fellow Glaswegian of Frankie’s, has got this well covered. Spotted by UFO Drummer Clive Edwards - an old Stable Mate of Frankie and Rays’ from Chrysalis Records days - he saw Greg singing along Karaoke style to Frankie playing on a Juke Box at a FREE Convention in a Newcastle Bar. He rang Ray immediately while videoing Gregor. All are agreed, this is as close a vocal delivery as you’re going to get to Frankie’s irreplaceable, God Given voice.

So if you fancy a great night of Rockin, Soulful, Sassy Bluesy Frankie Miller music, penned by this Absolute Legend of the International Music Scene, delivered by one of the Best Live British Bands around, what are you waiting for? It’s gotta be FULLHOUSE.

Currently in the mixing stages of a New Album - due out in mid 2020 - an Album which includes two previously unreleased Frankie Songs, featuring Newly recorded Backing Tracks from FULLHOUSE, and with Frankie himself on Lead vocals. A truly fantastic Re - Union.

SUPPORT from the Fabulous MATT SCOTT

Matt Scott is a singer-songwriter and multi-instrumentalist from the West of Scotland who has headlined shows across the UK, in North America and in Europe. 2017 saw the release of his debut EP, backed by a band, with the facetiously titled 'Whoever That Is…” followed by two headlining shows at King Tuts (Glasgow) and a headlining slot at Belladrum Tartan Heart Festival (Inverness).

North America had seen two performances by Matt in Nashville, Tennessee before starting 2018 with national radio coverage and further headline performances around Scotland.

The singer has received kudos from legendary Scottish artists such as Frankie Miller and Paolo Nutini, and has supported notable acts including The Alabama 3, Hurray for the Riff Raff, and Ben Caplan.

Matt has received national radio play through BBC Introducing following the release of his debut single ‘All Out Of Sorts’. The song has featured on Vic Galloway’s show and has been heralded by Jim Gellatly on Amazing Radio.

Tickets are £18 in advance (plus Booking Fee online) and available now.