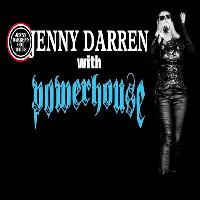 JENNY DARREN with POWERHOUSE at DreadnoughtRock

This event has already happened!
This event occurred in December 2019. If you're looking for a upcoming event, try the links below:
View more events.
Tweet

Lineup and Details for JENNY DARREN with POWERHOUSE

JENNY DARREN with POWERHOUSE at Dreadnoughtrock.

Jenny Darren : A singer since the age of 12; grew up & socialised with such rock notables as 'Robert Plant' & The Band of Joy: Slade: Jeff Lynne: Glenn Hughes (Trapeze/Deep Purple) Carl Wayne & The Move: Jimmy Page etc.

Performing at various U.K. venues, & promoted by the same local Agents who were instrumental in booking many of the above.

In her early twenties, Jenny burst onto the Rock scene - Supporting AC/DC on a six week U.K. Tour. Notably, only the only Female rock singer ever to do so.

Missing out by a hairs breadth, with a late single release of HEARTBREAKER (a hit for American Rock vocalist PAT BENETAR (but written exclusively for Jenny) re her Northern songwriting/ recording team - Geoff Gill & Cliff Wade. The song itself was initially released six month's esrlier on her ‘Queen of Fools album’.

With recording and releasing four albums on the DJM label - featuring the likes of future Iron Maiden drummer Nicko McBrain; then going on to support many high end artistes... (Be Bop Deluxe on - BBC’s - ‘Rock goes to College’) Patti Smith/Status Quo/Streetwalkers etc. at U.K Festivals.

For a short time in the 80’s, Jenny also recorded with ‘Dave Hill’ (Slade)

​Many gigs, tours, & Festivals later, Ms Darren hung up her rock heels for a time, to cross over into other jazz/classical & experimental genres.

Fast forward to 2015 - saw her returning to her rock roots. ‘Angel Air records’ released 'Heartbreaker - 'The Best of' Compilation, of the early DJM vinyl releases, getting Jenny's music onto CD for the first time. Ultimately deciding to re-record ‘Heartbreaker' on the recommendation of a friend, she began to work on a brand new album....

2018 saw re-releases of many forgotten original songs that Jenny wrote with Prog Rock keyboardist Robert Webb. The - ‘Rare Bird in Rock album’ which was released in the Summer of 2018.

A blistering performance on Britian's Got Talent won over the Judges and sent the YouTube hits on her audition into the millions.

2019 : Jenny has teamed up with Powerhouse, who need no introduction to the club or the area to perform at her BIG BIRTHDAY WEEKEND on the 13th October in Cirenceter SO it's a huge pleasure to welcome her and the lad to Dreadnoughtrock to perform some cracking songs on December 20th 2019.

TICKETS ONLINE ONLY from 13th October. Santa comes early Ticket offer of an UNBELIEVABLE £5 ONLINE - NO BOOKING FEE ALSO it'll be £5 OTD as well. It truly is a Christmas Miracle.
Because the Ticket price has now been put on a Santa Comes Early Special there still isn't any Loyalty Card offers applicable for this one as per the original ticket and gig info I'm afraid.

Rock Club action follows til 3am