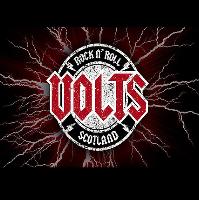 This event has already happened!
This event occurred in October 2019. If you're looking for a upcoming event, try the links below:
View more events.
Tweet

TICKET UPDATE 14th October : ALL TICKETS ARE SOLD OUT.

Please Join the skiddle waiting list if you still want to come then if anyone id RE:SELLING tickets using the skiddle RE:SELL facility then you will be offered them first.

Volts are Scotland's premier tribute to the world's greatest ever rock n' roll band, AC/DC. Formed in 2005, Volts have consistently focused on replicating the classic AC/DC sound. The shows are not for the faint-hearted - Willie (Bon/Brian), Craig (Angus), John (Malcolm), Tony (Cliff) and Iain (Phil) give nothing less than 100% every night to bring packed houses two blistering hours of non-stop AC/DC classics.

Drawing from the broad span of AC/DC's history, Volts mix a bit of the old with a bit of the not-so-old...the big numbers that everyone knows and loves peppered with the occasional connossieur’s choice.

Volts have graced many a venue large and small across the nation, including the Bonfest Bon Scott memorial event in Kirriemuir, The Big Ball in Wrexham, the Renfrew Ferry in Glasgow, The Albert Hall in Stirling, The Picture House in Edinburgh (supporting Saxon) and the Midstock Festival in Midlothian with Fish, The Hoosiers and The Fratellis.

Volts truly is THE band for the party-hard and the die-hard alike.

Not an AC/DC fan? Expect to leave the show converted

TICKETS £10 in advance again - Don't expect any tickets on the night - This gig sold out three weeks in advance last year !!

IF YOU ARE COMING - GET A TICKET IN ADVANCE.

TICKET ALSO includes entry to the Rock Club after the live show till 3am as well.